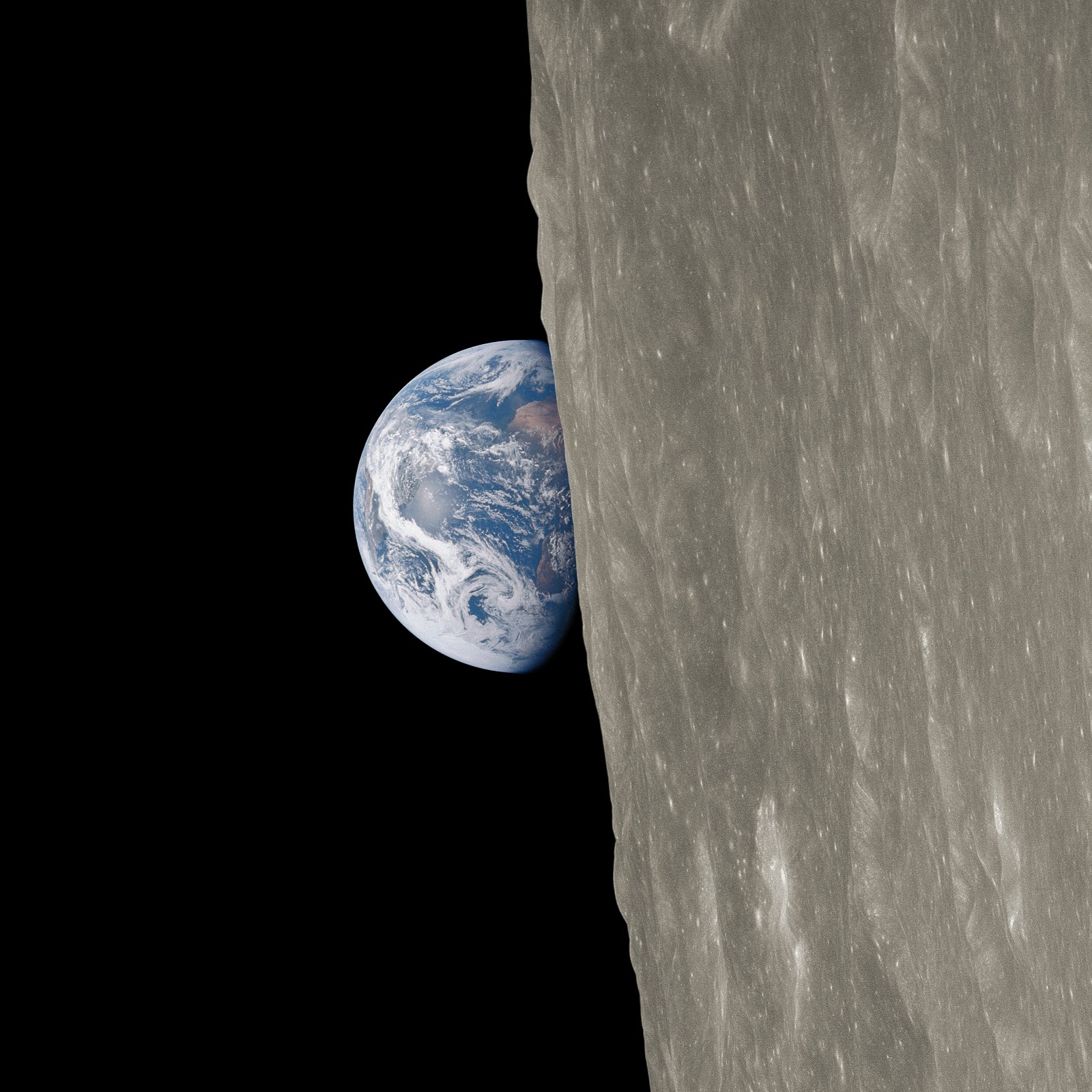 Oh my God, look at that picture over there! There's the Earth comin' up.
Wow, is that pretty!

Those were the first words out of Bill Anders' mouth when he saw the Earth coming 'round the bend as Apollo 8 orbited the moon on December 24, 1968. He quickly snapped a black & white picture with the camera he'd been using to photograph the moon's surface, then called to his colleagues for color film. It took a while for them to find the film, and the Earth kept moving away from the lunar horizon, but a minute later he snapped two more frames in color which became the iconic image of the planet known as "Earthrise." The view that first struck Anders, though—of the Earth just slipping into view—was recorded only in black & white.

A couple years ago I made a "2K" composite of the color and black & white images, but earlier this month I discovered higher-resolution 4 and 5K scans of the original 70mm frames and set about making a new version. The black & white frame is very crisp and, when stacked with the color frames, can be sharpened to a remarkable degree. The picture above is the result: Bill Anders' first black & white photo, with colors on the Earth supplied by the two later color shots. The lunar surface is from the black & white image, tinted slightly and brightness-adjusted to match the appearance of the moon as seen in modern DSCOVR satellite pictures of the moon transiting the Earth.

The classic Earthrise photo is usually rotated so the moon's edge is horizontal, but Apollo 8 was orbiting above the equator of the moon, and Anders has always displayed his copy of the picture with the lunar limb vertical: they were coming around the moon, which was on their right. In this alignment north is up, and you can see Africa in its familiar orientation on the mid-right side of the Earth, and South America on the left edge. (Use the mouse wheel to zoom in after clicking on the photo above.)

Christmas Eve 2018 will be the 50th anniversary of this picture's creation—the first time a human being ever laid eyes on our home planet sliding into view around the horizon of another world. I'm a bit early for the anniversary, but I think it's never too soon to look at the Earth and see it as something precious, a rare and beautiful haven for life, bobbing in a vast sea of brutal inhospitality. Everything we are, everything we will be in the near future is there, on that pretty blue marble set in emptiness and peeking around the lifeless gray expanse of the moon.

Smithsonian article about the making of the photos:
https://smithsonianmag.com/science-nature/who-took-legendary-earthrise-photo-apollo-8-180967505

About the title: The first photo of the Earth near the lunar horizon was taken by the unmanned Lunar Orbiter 1 spacecraft on August 23, 1966. (Taken on film, no less, which was developed while orbiting the moon and then scanned for transmission back to Earth—quite a feat.) That photo is frequently described as an Earthrise, but it's actually an "Earthset" rather than a rise: the spacecraft was heading behind the moon as it shot the picture, causing the Earth to sink below the horizon as time progressed. The Apollo 8 photo above really is the first Earthrise picture.

Copyright Info: The Apollo 8 source images are in the public domain, and my processing work on those images is released via a Creative Commons CC By 2.0 license (meaning you can use this picture pretty much however you want, no permission needed). I am just the "darkroom guy" for this historic photo, so I would prefer if you credited the image simply to "NASA / Apollo 8." If you're using the picture online, consider providing a link to this page so people can read about the making of it.